Find details on some of the public clocks in Christchurch. Located at the intersection of Victoria Street and Montreal Street.

Also known as the Victoria Clock Tower, this volcanic stone and limestone structure has ornate wrought iron work with coloured glass around part of the tower and four clock faces.

The tower has two white marble plaques and one bronze plaque set on stone work above arches. The upper part of the structure was designed by Benjamin Woolfield Mountfort and constructed in 1859 in England.

Originally intended to have been incorporated into the Canterbury Provincial Council buildings complex, it was too heavy for its intended site. In 1897 the structure was incorporated into a memorial clock tower for the 60th Jubilee of Queen Victoria's Reign, with a stone base at the intersection of High, Lichfield and Manchester Streets.

The tower was relocated due to traffic volumes, and erected on its present site in Victoria Street in 1930.

The clock stopped and the finial bent with the force of the earthquakes. The tower suffered structural and stonework damage which has now been repaired and strengthened.

There is more information about the clock and tower on the Christchurch City Libraries website(external link). Located at the corner of Madras Street and Oxford Terrace.

With strong historical and social significance, the Clock Tower was erected in 1929.

It has a strong connection to prominent businessman and philanthropist Thomas Edmond, who donated £5,000 toward the River Bank Improvement Scheme to commemorate his 50 years of business in Christchurch.

The scheme comprised the clock tower and telephone cabinet/drinking fountain on Madras Street along with the band rotunda and shelter on the Cambridge Terrace riverbank upstream of Manchester Street.

As a result of the Canterbury earthquakes, the Edmonds Clock Tower sustained cracking at two levels and the top section moved. There was also moderate damage around the windows.

In May 2012 the tower was carefully removed and placed on a bed of sand. A timber frame was put around it to stabilise the tower and tarpaulins kept the structure weatherproofed. The work was carried out by qualified tradespeople who worked closely with the Council’s heritage planners.

All work carried out at the site was in line with the principles of the International Council on Monuments and Sites (ICOMOS(external link)) 2012 New Zealand charter.

On 23 April 2013 the upper portion of the clock tower was lifted off its bed of sand and back onto its base.

Repairs have been completed on the base structure and now the top has been re-settled, further work will be done to attach the two haves.  Once the halves are firmly attached, additional repairs will continue on the whole structure.

For pictures of the lift occurring visit Facebook(external link). The Floral Clock was presented to the citizens of Christchurch by former retailer Calder Mackay Co. Ltd in 1953.

It is electrically operated and the face is about 8.5 metres in diameter. Two bronze plaques are set into the wall at the base. 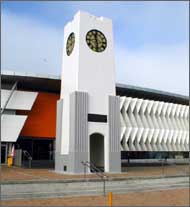 Located on reserve in Marine Parade, on foreshore opposite the end of Seaview Road. On reserve at Taylor's Mistake end of Scarborough Park.

This clock and tower were donated to the Borough of Sumner by Richard Edward Green, to perpetuate the name of his father Edmund Green. A Canterbury pioneer who arrived in Christchurch on 4 August 1859 to install the telegraph system over this island the first in New Zealand. His son, the donor, was born in Staffordshire, England, on 14 December 1852, and came to Christchurch with his parents in the ship Mary Ann.