Remembering the Council's homes over the years.

Christchurch has seen many changes since it became New Zealand’s first city in July 1856 but none more so than what we have witnessed since September 2010.

The Council has occupied a number of buildings over this time before Civic Offices in Hereford Street were officially opened, just prior to the September 2010 Darfield Earthquake.

We can celebrate our achievements by looking back at a snippet of our past through the buildings occupied. The following buildings were home to the Council after it was first established in 1862. Of the five buildings displayed only two remain: the current Council building on Hereford Street and the Municipal Chambers, built in 1887, designed by Samuel Hurst Seager, and now severely damaged.

Our shared past is now a firm reminder of what we’ve lost and what we have to rebuild. 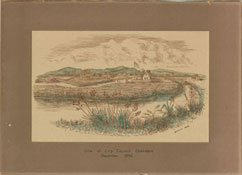 Christchurch was founded in 1850 by the arrival of about 800 settlers onboard the first ships organised by the Canterbury Association from England. For many of these early settlers, they had never seen, let alone been on board, a ship.

The route taken was the longest and most treacherous of any of the emigrant routes travelling through the Atlantic Ocean, around the Cape of Good Hope – the south-west corner of the Cape Peninsula, South Africa – before turning eastward for New Zealand.

The emigrant ships crossed the Indian Ocean and sailed below Australia before travelling up the east coast of the South Island to reach Canterbury. Those on board suffered both the extreme heat of the tropics and the cold temperatures of the southern latitudes.

According to Morrison (1948:8) “The first impression of the majority was one of deep disillusionment as to this land of their dreams. They remained because they could not return….They laughed, a little ruefully perhaps, with Crosbie Ward and the rest of the Canterbury rhymers, and it was not long before they set to work to improve their depressing environment….Crosbie Ward wrote ….Oh! The town of Christchurch is an elegant mixture of roads and pasture and swamp and sand…”

Christchurch became New Zealand’s first city in 1856 and “…in its first stage as a town – some slight semblance of streets, scattered wooden houses and huts; the flat plain, in its primaeval state of tussock grass, forms its suburbs” (Morrison, 1948:15).

The first meeting of the Christchurch Municipal Council was held on 3 March 1862 (later that year became the Christchurch City Council). Meetings were held in the first public building erected in Christchurch on the banks of the Avon River in Worcester Street. This had first been used as the Land Office in 1851 and was used for various purposes including government buildings, survey office, resident magistrate’s court, Supreme Court and library as well as municipal chambers.

This is the only building that has been purpose-built for the Christchurch City Council. Every other building that has housed the Council has been an existing building modified to suit the Council’s requirements. This building was designed by local architect Samuel Hurst Seager and was erected on the cleared site of the old Land Office. It was completed on 24 March 1887 and the first meeting took place on 4 April 1887.

Read more about this building(external link) at the Christchurch City Libraries' website.

Please note: this building still exists today, Our City O-Tautahi occupied the building until the Canterbury Earthquakes. Even damaged it is a feature within the City for its stunning architectural features.

By 1919, the Municipal Chambers had become too small and the Council began the search for a new home. In 1920 the Council purchased what remained of the Canterbury Hall Company on Manchester Street after fire gutted the building in 1917.

The new offices were opened 1 September 1924 and the Council met for the first time a week later. This building, now demolished, served the Christchurch City Council and its staff for 56 years.

Read more about this building(external link) at the Christchurch City Libraries' website.

The functions of the Council expanded after World War II with a consequent increase in staff. Overflow offices were either bought or leased and by 1978 the staff occupied all or part of nine separate buildings. In 1979 the Council purchased the building, formerly the home of Millers, that was officially opened by the Duchess of Kent in December 1980. This building is now demolished.

The seven-storey building was intended to house in the one location Council staff who were working from five locations within the Central Business District. This was to enable the Council to improve the efficiency of its service delivery and strengthen the One Organisation approach. Following the earthquakes, Council was once again in more than one location within the Central Business District.

A New Zealand-first innovation in the new Civic Building is the tri-generation plant. This enables the new Civic Building to generate its own electricity, heating and cooling from a renewable source – biogas. This is piped from the Council's Burwood landfill site and converted into electricity. The heat from this process is used to both heat, and then by a process of heat conversion, cool the building.